You may have remembered that back in July 2016, I had started on a few games, and ended up releasing a playable preview of Let's Invade. Well good news is that, although I am still at the early stages of the game project, things are starting to shape up quite nicely. THIS WEEK in fact. 11 levels have been placed into the game code, a couple of extra alien colours have been added. A built in 'transparent and solid' mode option also got built into the code. Finally animated background replaces the background scheme (due to colour clashing - aliens were too hard to see at times). Each level should have a different background tile scheme in the near future. 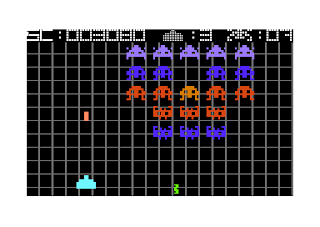 Most of this week's session was basically working on getting each level set up. 11 levels have been done so far. Early levels have a few aliens, then as each level advances, more aliens will appear on to the screen. After five levels, Aliens appear in lighter colours. Those aliens will require more than just one hit. Levels 5 - 10 use this method, and the game sorts of intensifies a little. Should I get round to adding more levels to the game, the plans are that levels 11 - 15 will require aliens that need 3 hits to kill ... 16-20 is planned to intensify the game even more where the 1x,2x,3x aliens to hit are mixed. Later levels will lower the position of the aliens, and probably speed them up. I added couple of extra colours (purple and orange) in the macro source, where a purple alien will give the player an extra life, and the orange gives a power up or a power down. (Not implemented yet, only changes the border colour for the timebeing). 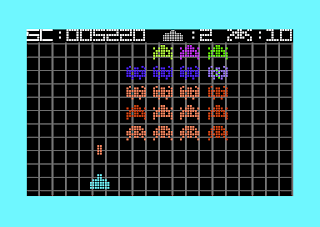 After the levels are complete, I aim to focus on the 2x2 scrolling tile graphics, and make the scrolling of each tile move according to a timer (Remember the TND Intro 2014 intro I did for Dark Force, during February 2014?). Also there's in game trance music, power ups and presentation to focus on.

Keep an eye on my next blog to find out the next update with this project. :) 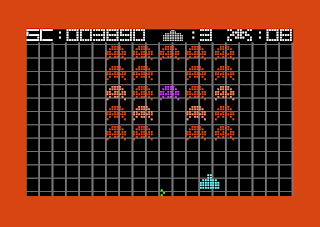 Looks a bit like something in the early 1980's with that border eh? Well, things will be modern in this game project sooner or later :)