Over the past few weeks, I have been working on a brand new Commodore 64 space blaster called 'X-Force'. It is a horizontal scrolling shoot 'em up (SURPRISE), which will be featuring stunning graphics and level designs by Saul Cross, and also some great music, which was composed back in the 1990's by Feekzoid from a stunning Sideways SEUCK preview of Breakthrough, whereas the full game never saw the light of day. I have of course asked Jon for his kind permission if I could use Feekzoid's Breakthrough music for this game, and permission was granted by Jon, himself.

So what's this X-Force game all about then? Well, you have been held prisoner, while exploring an alien planet called 'Darx'. The aliens recaptured your X-Force fighter, and has held you prisoner in the underground world. You manage to break out of your cell, and reach for the X-Force fighter. Just as you take off to make your escape, aliens start coming after you.

The mission is to escape from the underground worlds of planet 'Darx'. Simply by using a joystick in port 2, you must guide your X-Force fighter across enemy territory, and shoot down the aliens which to to stop you. One hit at the alien, and they're gone. To be able to escape from the each underground world, you have to face an end of level guardian. It will try and stop you before it gets away. Should the boss be destroyed after enough hits, you will gain bonus points. Should you let it escape, then you get no bonus points.

The X-Force fighter can pick up podules in which will give the space craft upgraded / downgraded lasers. Depending on whether a red or green podule has been picked up. Blue ones will give the space craft a shield and the grey ones will act as mines. Touch a grey one, if not carrying a shield, and the X-Force fighter will explode. Aliens and deadly background, animated lazers will also make the player explode - unless the player's shield has been activated. 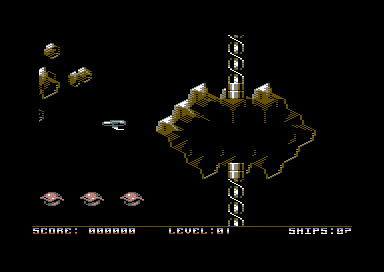 The C64 game, 'Subterrenea' by Hewson inspired me to work on this game. 'X-Force' is being produced for the Commodore Format power pack 63, which is planned to be launched some time in October 2014 and will not be release before then (Announced on Commodore Format Archive's blog). As soon as the game is finished, it should feature loads of stunning levels, to blast your way through.The game will also be available on the TND web site a week later :) Of course, the game is going to be FREE. :)

Hope to do more work on this game some time tomorrow.