Just to let you know that progress for Vortex Crystals is still under development. However, on Friday 13th November. Disaster struck on my HDD. When I tried to load the assembly source file of the Vortex Crystals, I ended up with a blank file as the main file. This happened after an update was installed, and the PC HDD was undergoing repairs by the Op System boot up. I tried copying the file from the backup drive, and sadly it was the older source file and incorrect. Damn, all is lost ... Well not exactly, here's what happened.

When I'm working physically, and feel tired, I can get myself lost in places, and the same with file organisation. I spent most of my time searching for the correct backup source of the missing code on that day. Thankfully, it got found, and I was able to continue doing more levels for the game. (grin). 7 levels were already complete, so I worked on levels 8 and 9. Level 9 introduces 'I-Droid', the eye type of alien. 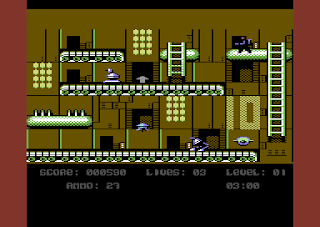 More progress with the level setup, but I came across a small problem with level 10. Alf forgot to add a door on to the stage. So in order to resolve this problem. I decided to disguise one of the alien spawn gates as an exit. Therefore making this level more challenging. Then I started on doing level 11. This level introduces two new and harder aliens, which are the Squidroid (10 hits to kill) and Robot (8 hits to kill). These later levels are planned to frustrate the player more, as the player only has a limited amount of ammo to fire. Shooting 3 aliens will give the player 10 extra ammo, if the power up box is picked up straight away. Later levels are also intending to get even more frustrating, when the simple aliens (from levels 1 - 10) will not be appearing on the later levels. :)


The deadline is about 2 months and a half away for this game to be entered to the compo, and I'm quite confident that it will be finished in time. :)