This week I decided to work more on the game graphics for Trance Sector I wasn't too sure what to draw the game levels with as I didn't want to experience another crash with MSCK. Funnily enough, I found that Charpad was unsuitable to build the levels, because putting the level objects (as single screens) was more difficult. Plus the type of tiles would have been too limited. So instead, I worked on MSCK V2.0 and hoping this time the program won't crash. I managed to rebuild the objects, opened my mind, and built 20 levels. That was Yesterday of course.I even did a new title screen, according to what was written on my little note pad, when I attended RetroVision 2012 Saturday, last week.

Today I worked on installing the new game graphics library into the game's source code, and updated the amount of pods for the player to collect. I even tested the whole game, hoping the library source wouldn't crash. Thankfully it didn't crash. After the 20 levels were fitted in to the code, nicely (Apart from some shield tiles which haven't been programmed yet) I tested through the whole game and found no problems. After I was happy with this, I worked on an ending tune using GoatTracker. Then I ported the music data to the game again. I tried to do some in game sound effects for Trance Sector using GoatTracker, but there were delays before a sound effect played. I think I should program my own sound effects instead, like I did with Sub Hunter and Sheepoid instead. It might be more helpful ;) 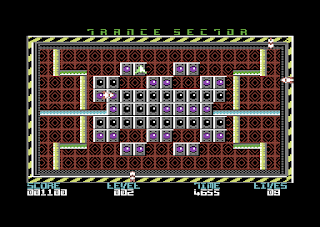 The last part of the day was programming the new title screen for the game. In which looks completely different to how I normally program a front end. I usually program a front end using a plain black screen with a logo on the top of the screen, with flashing text, and a scroll text at the bottom. That's nothing unusual. Instead, I decided to work on a more epic title screen, in which displays 1x1 char bricks forming the name Trance Sector on the screen, an upward scrolling ticker tape routine (Like Monty on the Run) inside the window, and also a sprite scrolling message at the bottom of the screen. I was unable to open the borders because for some reason, it kept flickering and delaying when the sprite was there ... So I left it out for the time being. The new title screen looks retro and hopefully the gamers will like it as well. :) 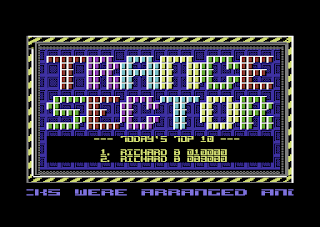 More work on the game tomorrow or Wednesday. Well I have another 44 levels to build up, and probably add some brand new tiles as well, such as seeker switches. Also to get the shield working as well  ;)